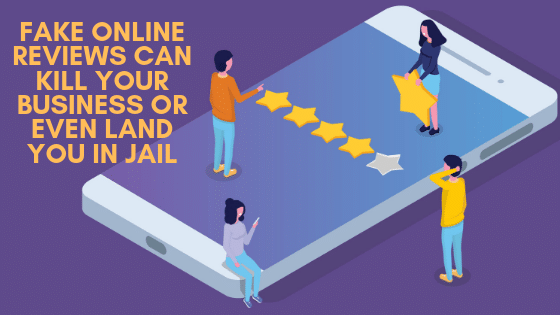 Are you tempted to try something a little bit shady to get some good online reviews? You may think, “What’s the worst thing that could happen? I get in trouble with the internet police?”

No, you can get in trouble with the real police. Seriously.

It hasn’t happened in North America yet, but there was recently a landmark ruling over in Italy. After Tripadvisor identified and removed over 1,000 fake reviews, the company Promo Salento was found guilty of fraud in Italian courts.

The owner of the fraudulent reviewer site was not named, however, he was sentenced to 9 months in a 1-star jail cell and forced to pay nearly $10,000 in damages.

“Writing fake reviews has always been fraud, but this is the first time we’ve seen someone sent to jail as a result,” said Brad Young, an attorney for TripAdvisor.

There have not been any instances of any North American companies being jailed for fake online reviews… yet. However, this case in Italy certainly opens the door for it to happen. Particularly because online reviews are a billion-dollar business, and the top players are coming down harder and harder on people who cheat, while getting progressively better at catching the cheaters.

The Rules and Penalties for Fake Reviews

You may not go to jail, but you’re not getting off scot-free if you get caught faking your reviews for the biggest sites in the world.

Let’s start here. They may not quite be the #1 review site. However, they are without question the #1 hard-asses when it comes to dealing with fake reviews.

First of all, they do not even want your business to actively ask for Yelp reviews. Not in your restaurant, not in your print materials, not in your newsletter. Nowhere! 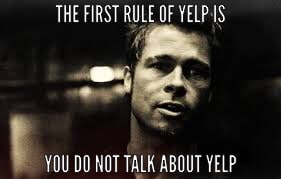 Yelp’s rules state that you are not to:

If they catch you doing it, they will come down on you like a firestorm! They frequently review their content, and if they catch you breaking their rules you could be faced with: 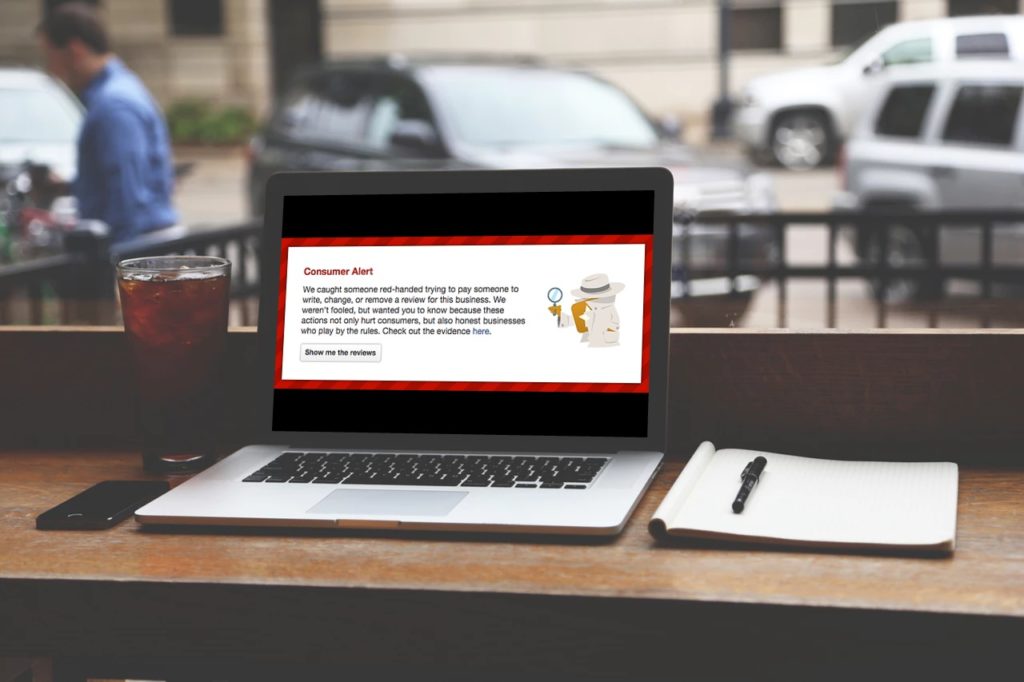 They have also been cracking down even further and issuing very aggressive warnings to companies that they have flagged for posting reviews on behalf of their clients.

It is simply not worth it to mess around with Yelp anymore. These penalties can obviously hurt your SEO greatly and kill your website’s traffic. 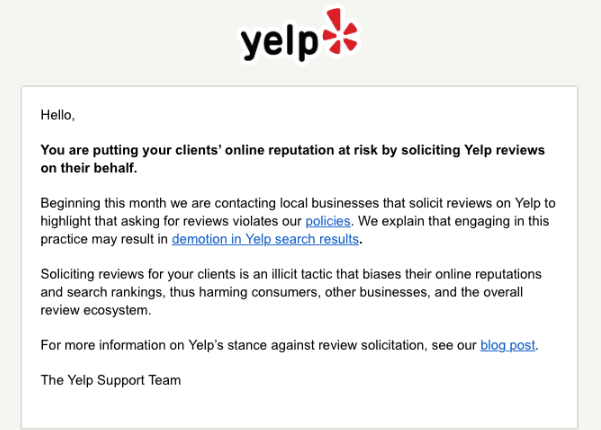 Google is not as hard-handed as Yelp in policing their own reviews, but nobody else really is.  Their guidelines do allow you to ask for reviews or remind customers to give you a quick review. But like Yelp, they don’t want you offering any incentives to customers for doing so.

They also, obviously, don’t want you posting or allowing fake reviews. If you do so you could be facing fines from the FTC. In fact, not too long ago a car dealership had to pay almost 4-million dollars in fines for duping customers with fake reviews.

They are vague about what the penalties are for smaller instances of getting caught. However, I think we can all agree that is just in your best interest to stay on the good side of the world’s largest search engine, and the people controlling all of your web traffic.

Don’t take any chances, if you do see a spammy review show up in your feed, report it as quickly as you can. The process is actually a little involved, so you might want to read this to find out how to do it properly.

If you see fake reviews show up, don’t panic, you’re not alone. We’ve seen Google hit with mass waves of fake reviews in recent years. Most recently, in 2018 they confirmed they were hit with about 3 million.

How to Get Reviews “The Right Way” 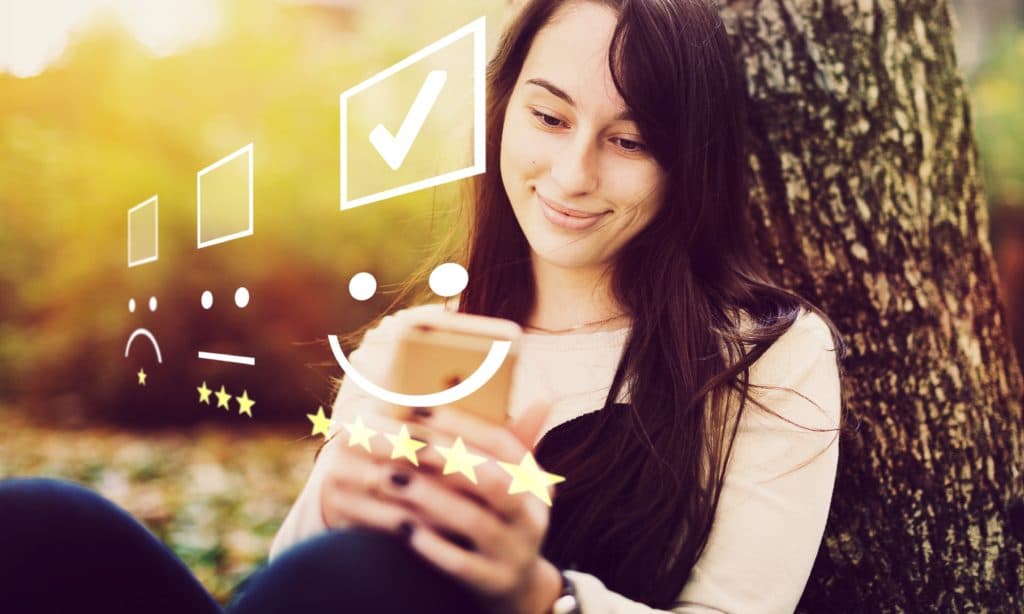 Now that we’ve scared you with the implications of doing things the wrong way, we will walk you through the right way to collect online reviews. You don’t need the best SEO expert to do this. You can do a lot of it on your own.

Get More Yelp Reviews, Without Cheating

In the previous section, we explored how Yelp sort of handcuffs you from doing anything to actively encourage your customers to leave a review. However, you don’t have to just sit back and hope that people find it in their heart to give you an unprompted Yelp review.

According to Yelp’s Guidelines, you can:

“Provide the best experience”
This is always the first step in earning organic reviews.

“Engage with your customers”
This means being sure to build relationships by responding to the reviews that you do get, good or bad.

“Turn visitors into customers”
They also recommend leveraging their features such as:

“Make it easy to find you”
Make sure Yelp has all of your most current information, like your address and business hours. Also, make sure you’re listed in the correct business category or categories.

“Display approved Yelp branding”
You can proudly display “People love us on Yelp” window stickers and buttons on your website or social media accounts. The key part there is approved branding, which you have to request from them. You can’t create your own or take any liberties with theirs.

You will also want to report anything you suspect is fake in your reviews.

“Just say no” if anyone offers you any sort of shortcut or hack to get more reviews, including “review swaps.” 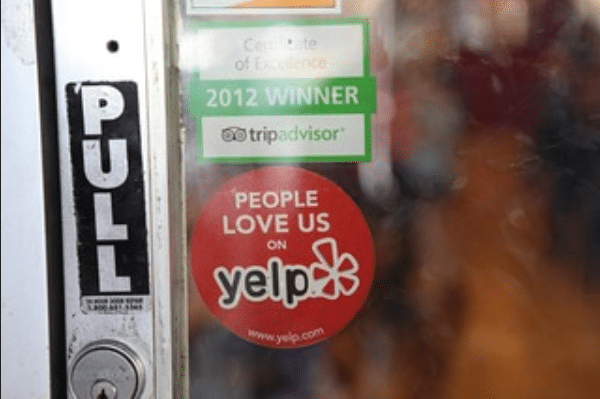 Again, Google is a lot more flexible in how you go about collecting and seeking online reviews from your customers.

This opens up a lot more options, so you can be far more creative and aggressive. For example, this may include:

Frontline Staff:
You can train your staff to ask for a Google review at the end of a transaction.

Print Materials:
You can add a reminder on your menus, brochures or even your sales receipts.

Online:
You can add a “Review Us” button, link, or section to your website or social media accounts. You do not have to use Google-approved branding to do so, unlike Yelp.

Signage:
You can have any signage you want at the front of your business (or anywhere else) reminding people that you would love their feedback in a Google review.

However, the stuff that Google does provide you with is very cool. You can turn your best reviews into signs and blackboards that you can proudly display around your business. To see some of your options, click here. 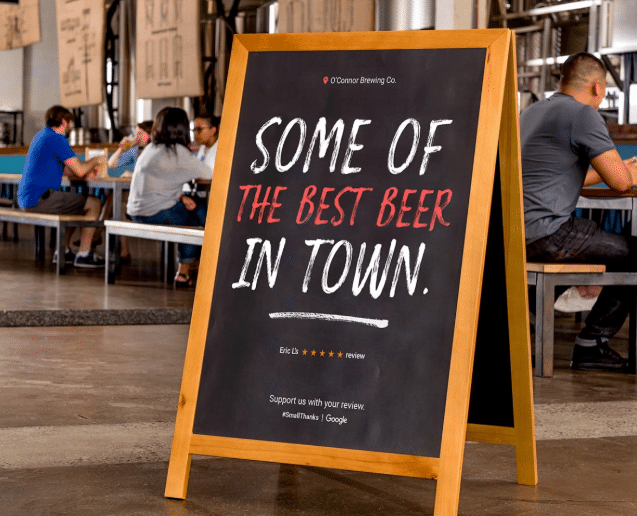 But Be Careful With Email and SMS

Google does warn you not to “solicit reviews from customers in bulk.” This is murky, but that could include using mass SMS messaging or using your email list.

The Role of Online Reviews in SEO

There is a reason we are all killing ourselves to get these reviews. They are worth it and they are the backbone of your off-page local SEO efforts.

Just look at some of these recent stats:

It doesn’t matter if your business is lamb curry or landscaping, it is nearly impossible to rank locally in a competitive market if you don’t have:

A good customer review sends a signal to Google that your business is amazing and deserves to be rewarded.

How Much is a Good Review Worth?

It’s nearly impossible to put a dollar value on a good review. Also, as we outlined above, you can’t buy good reviews. You can try but it will blow up in your face. If you’re still considering it, please re-read the top section of this blog.

The simple answer to this is “Google ain’t telling us.” The more complex answer is that the Google algo is maddeningly complex and changes a few hundred times a year. Even if we had a steadfast answer today, that number would be meaningless by October.

We can’t give you a hard number or a steadfast ratio. But we can give you some things that we do know that are predictive of ranking success using reviews, based on our countless hours pouring over the data.

All Users are Weighed Equally

Here is the good news. No single user account is weighted any more or less than another account. It doesn’t matter if you’re a [email protected] or [email protected], both of your votes on the same burrito count for the same.

It does not appear that the more restaurants or businesses you review, the more clout your vote has. There is really no such thing as an Influencer when it comes to online reviews. Your Google review isn’t going to count for more if you have 100,000 Instagram followers or anything like that.

This is not like link-building, where we have domain authority. A link from a more respected or popular domain is worth more than a smaller domain. With reviews, all votes are worth the same, and this is a pure online democracy.

The Size and Competitiveness of the Market Matter

This is likely the most complex and dynamic variable in play here.

Think about it this way. Let’s say you teach Muay Thai lessons in Toronto. A quick Google search reveals that there are a few businesses in Toronto that are also teaching people to throw knees and elbows. 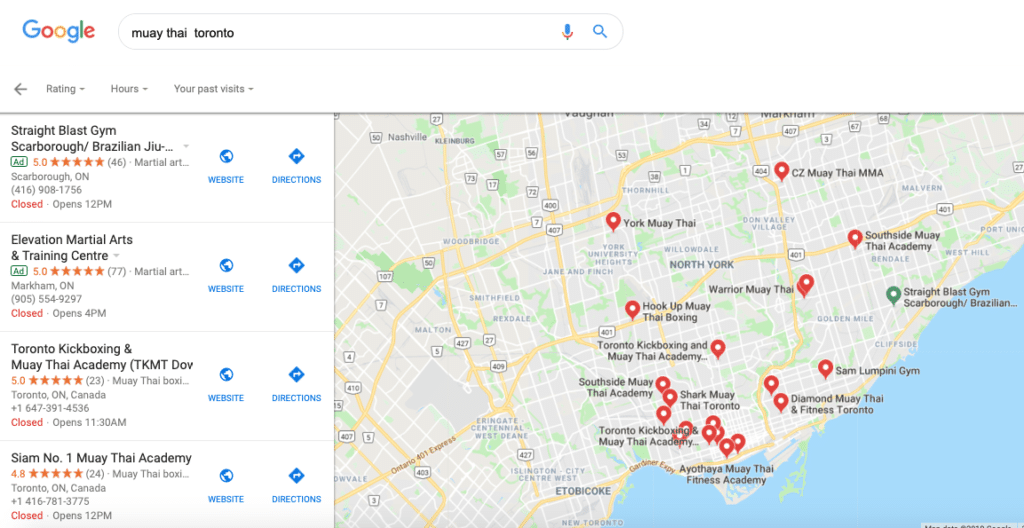 This isn’t an insanely competitive market and 20 or so good reviews is enough to keep you at the top of the rankings.

Now. Let’s say you’re in the hypercompetitive coffee market. You are competing against hundreds of other businesses, with new shops rising and falling off of the maps every single week.

This is far more competitive. You need hundreds or thousands of reviews to compete. You’re competing against major chains like Tim Hortons and Starbucks, plus smaller coffee shops with a cult following because they were well-reviewed in BlogTo or something like that.

The 20 votes that the Muay Thai business got will not have nearly as much impact in this market.  Dinee may see 20 reviews over a weekend.

Data points to a healthy number of fresh reviews steadily pouring in being better than a larger pile of stale reviews.

Let’s say you and the Other Guys opened the same weekend. They had a massive initial push and you had a smaller “soft launch.”

They got an incredible 250 reviews that weekend, you got 25. So the other guys are more likely to jump out to an early ranking lead on you, based on that spike. However. Let’s say that their reviews sort of stagnate. Maybe they only get 1 or two new reviews each week after that, but you are steadily earning 25 per week.

Not only are you going to catch up to them, but you can also potentially overtake them a lot quicker than you think.

Of course, there are literally hundreds of other factors in play there:

However, the key takeaway is that -not unlike fresh content- a steady supply of fresher reviews is likely better than a big stockpile of older reviews that haven’t been updated in months.

How Do I Recover From a String of Bad Reviews?

Things happen. Maybe you received a string of bad reviews and your rating is down to a customer-prohibitive number like a 2.7 or something like that.

A vicious cycle ensues. You need more customer reviews to bring that number up, but you’re now seeing fewer customers come through your doors because you’re a scary 2.7.

Does this mean you’re doomed and might as well close up shop? You wouldn’t be the first to do so. However, this doesn’t have to be a death sentence and you can recover.

We just wouldn’t recommend trying it alone. Enlist the help of an SEO expert who can help you use proven organic tactics to bring that score back up where you want it to be.

If you want to talk about it, please feel free to contact me any time. 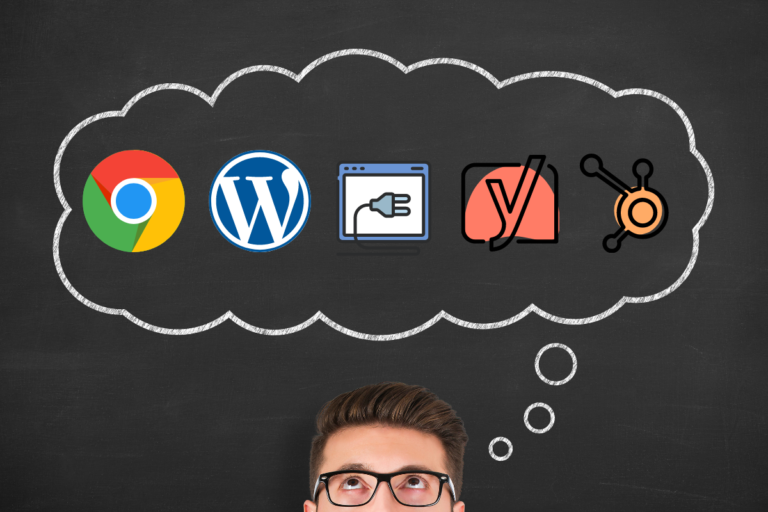 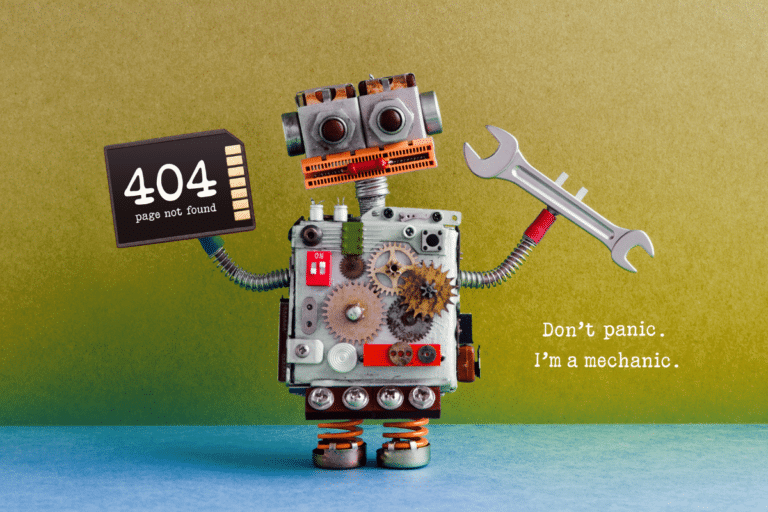 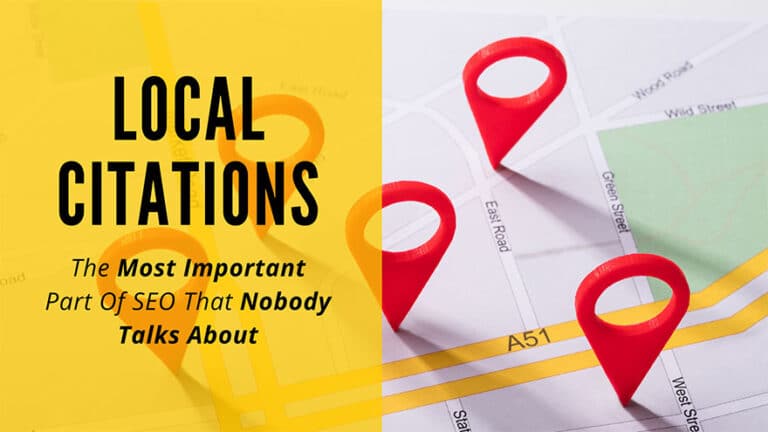 Local Citations: The Most Important Part Of SEO That Nobody Talks About